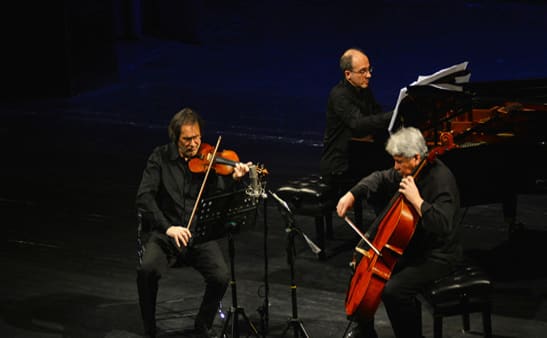 All three artists, the pianist, Peter Zoltan, the violinist, Volodja Balzalorsky and the cellist Damir Hamidullin, have performed internationally as guests of numerous music festivals and cycles, and as soloists with many orchestras.

Individually, as well, they have also created multiple CD,s and have made extensive live and archival radio and TV recordings throughout Europe and in the USA and Asia.

The trio has 18 years of successful performances in a variety of venues, concert series, and festivals including: Universal Affair at Carnegie Hall and Spectrum Ferstival at Carnegie Hall in New York.

The Amael Trio has achieved the status of being among the most sought after chamber groups in Slovenia. In addition to performing known traditional trio literature from various style epochs, the trio is also dedicated to performing contemporary works, and to the promotion, internationally, of Slovenian composers of piano trio literature.

Pianist Zoltan PETER was born in Vojvodina. He attended the Secondary School of Music in Subotica (directed by Marija Sekelj) and then went on to study under Professor Arbo Valdma at the Academy of Arts in Novi Sad. His formal study was completed of the piano at the Ljubljana Academy of Music.

As a soloist, chamber musician and piano accompanist for many excellent musicians of the highest level from both the younger and older generations, he has been a guest performer in Italy, Hungary, the former Soviet Union, Germany and Switzerland, and well as at festivals of contemporary music.

As a soloist with orchestra, he has performed under the baton of conductors such as Igor Gjadrov, Simon Robinson, Berislav Skenderović, Hermann Ostendarp, Guido Mancuzzi, George Pehlivanian, Paul Hoskins, En Shao and others.

Numerous highly praised concerts, broadcasts, CD and TV recordings in various countries have established his reputation as an artist with a sensitive, intelligent, and intuitive gift of interpretation, a polished technique, and a rich, full tone.

Cellist Damir Hamidullin is a virtuoso soloist and an excellent representative of the famous Russian cello school.
He is first solo cellist of the National Opera House in Ljubljana (Slovenia) and a member of the Amael piano trio.
He performs throughout Europe as a soloist, recitalist and chamber musician.
He has played as a soloist many times with the Kazan Philharmonic Damir Hamidulin
and with other symphonic and chamber orchestras in Russia and in
Slovenia.

He plays all the famous concertos on his instrument: Haydn, Dvorak, Saint-Saens, Schumann, and Tchaikovsky.